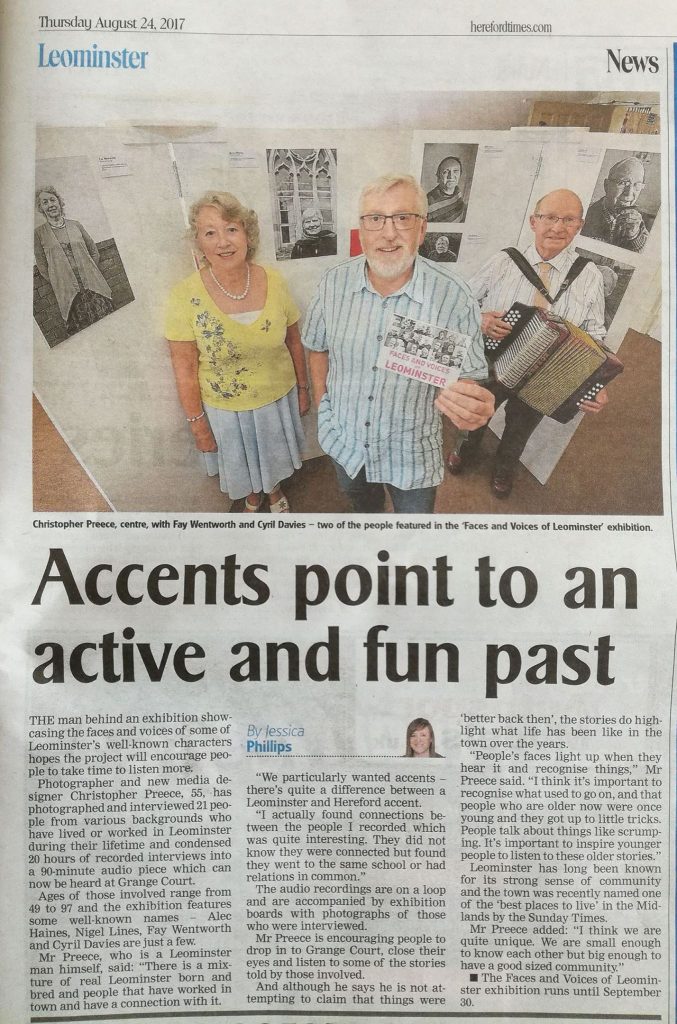 The man behind an exhibition showcasing the faces and voices of some of Leominster’s well-known characters hopes the project will encourage people to take time to listen more.

Photographer and new media designer Christopher Preece, 55, has photographed and interviewed 21 people from various backgrounds who have lived or worked in Leominster during their lifetime and condensed 20 hours of recorded interviews into a 90-minute audio piece which can now be heard at Grange Court.

Ages of those involved range from 49 to 97 and the exhibition features some well-known names – Alec Haines, Nigel Lines, Fay Wentworth and Cyril Davies just a few. Mr Preece, who is a Leominster man himself, said: “There is a mixture of real Leominster born and bred and people that have worked in town and have a connection with it.

“We particularly wanted accents – there’s quite a difference between a Leominster and Hereford accent. “I actually found connections between the people I recorded which was quite interesting. They did not know they were connected but found they went to the same school or had relations in common.”

The audio recordings are on a loop and are accompanied by exhibition boards with photographs of those who were interviewed. Mr Preece is encouraging people to drop in to Grange Court, have a cup of coffee, close their eyes and listen to some of the stories told by those involved. And although he says he is not attempting to claim that things were ‘better back then’, the stories do highlight what life has been like in the town over the years.

“People’s faces light up when they hear it and recognise things [being talked about],” Mr Preece said. “I think it’s important to recognise what used to go on, and that people who are older now were once young and they got up to little tricks. People talk about things like scrumping. It’s important, I think, to inspire younger people to listen to these older stories.” Leominster has long been known for its strong sense of community and the town was recently named one of the ‘best places to live’ in the Midlands, alongside Ledbury, by the Sunday Times. Mr Preece added: “I think we are quite unique. We are small enough to know each other but big enough to have a good sized community.”

The Faces and Voices of Leominster exhibition is at Grange Court until September 30 2017. (It’s now a permanent exhibition, see the Grange Court website for details)

Thanks to Denise Pugh (Pug) for contributing to Faces and Voices of Leominster and bringing some school friends to see it today.

Posted by Faces and Voices on Saturday, 5 August 2017